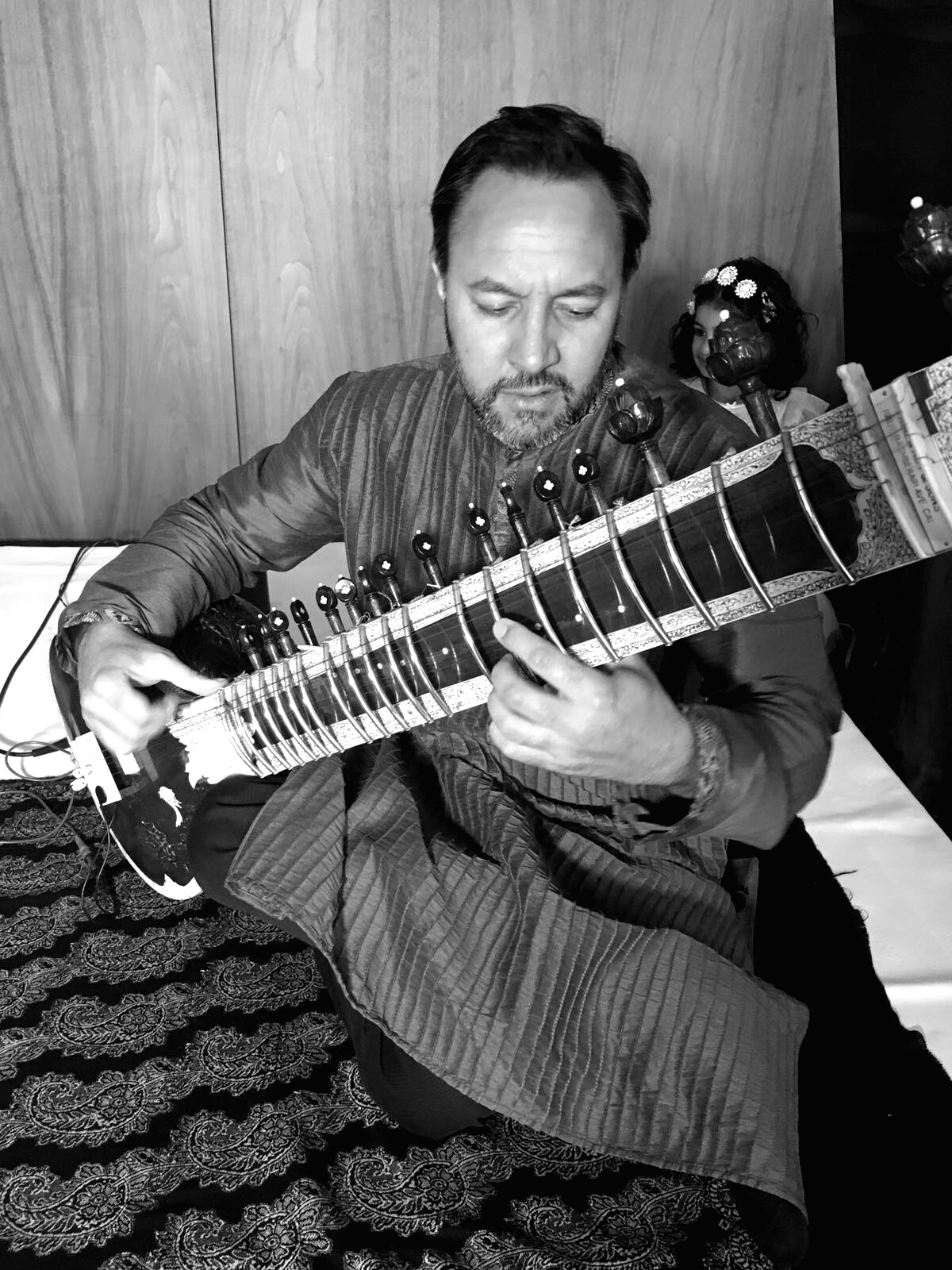 Son of the late Kolkata composer John Mayer, Jonathan began his musical training at the early age of 5 with violin from his grandfather Albert Hepton, piano from James Methuen-Campbell and composition from his father. At the age of 16 he started his sitar training under the western sitarist Clem Alford who was a disciple of Sachindra Nath Saha from the Senia gharana. In 1993 Jonathan began studying composition from Andrew Downes as well as sitar at the Birmingham Conservatoire where he gained a B.Mus (Hons). After graduating he studied Imdadkhani gharana technical proficiency under Ustad Wajahat Khan and finally settled in to the Senia veen-kar Gharana under the extremely knowledgeable maestro the late Pandit Subroto Roy Chowdhury.
Because of his ability to read western notation he has performed in a variety of genres and so far his career has seen him play with artists such as Anup Jalota, Kathryn Tickell, Kumar Bose, Kuljit Bhamra, Erich Gruenburg, Rohan De Sarem, The London Philharmonic Orchestra, Bohuslav Martinu Philharmonic Orchestra, Kenny Wheeler, The Orlando Consort, John Wilson, Bombay Dub Orchestra, Future Sounds of London, Karlovy Vary Philharmonia and BBC Concert Orchestra.
Jonathan has composed extensively for many genres including jazz, Indian & symphonic writing. His works have been performed and commissioned by The London Philharmonic Orchestra, Pilsen Philharmonic Orchestra, Docklands Sinfonia, Bohuslav Martinu Philharmonic Orchestra, Erich Gruenburg, Joji Hattori, and his father’s band Indo-Jazz Fusions. Jonathan works closely with ZerOclassiKal and has had 2 Arts Council England commissions with the projects Perseverance and Altered Boudaries.  In 2021 his Sitar Concerto No.2 and Pranam will be released on First Hand Records, this was recorded with The BBC National Orchestra of Wales in 2020 and will include works by his father John Mayer. Jonathan can be heard on many soundtracks & films including Sarah Brightmans’ Eden, Kevin Spaceys’ Beyond the sea, Indian Summer (Channel 4), Victoria & Abdul (where he can be seen on film) and Salty. Jonathan is also co-founder of First Hand Records Ltd which was formed in 2007 to promote is father’s works, since then FHR has established itself as a label releasing exceptional music across many genres.
Jonathan has performed all over the world including, France, Germany, Russia, United Arab Emirates, USA, Australia, America, Bangladesh, Sri Lanka, and two very successful tours in India which includes a performance at The Dover Lane Music Conference as well as a number of performances for the BBC in the UK.